The Daibiru Group considers its corporate social responsibility initiatives to be one of its most important missions.
The “Group Code of Conduct” was formulated with this in mind. The Daibiru Group will focus on the corporate principles and comply with the “Group Code of Conduct” in its corporate activities while at the same time making the utmost efforts to achieve sustainable growth in harmony with society.
Furthermore, conforms to “Environmental Policy of the Group” the Daibiru Group works with all its stakeholders, including customers, local communities, and business partners, to ensure that its activities compliment and harmonize with the natural environment.

“Nakanoshima Shiki-no-oka” is connected by a pedestrian bridge to the promenade beside the Dojima River that runs past the northern side of the site. In the future, we intend to build a pedestrian bridge connecting to Nakanoshima 4-chome as well, where Osaka City plans to locate a museum of modern art. This will increase foot traffic in the Nakanoshima district, and will contribute to the enhancement of pedestrian safety by separating walking areas from those used by cars. 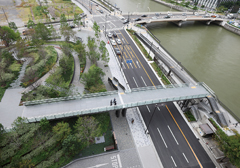 In order to provide office buildings where people can work with peace of mind, we conduct annual disaster prevention drills at our buildings. With the aim of improving tenants’ knowledge of disaster prevention, the drills include confirming evacuation routes, as well as exercises conducted at spaces such as on the roof of the building where employees can experience a smoke-filled environment and practice using fire extinguishers with the cooperation of the fire department in charge. 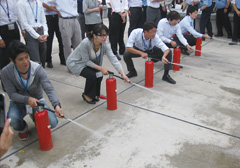 Since 2013, we have been carrying out the Nakanoshima West Water Sprinkling Project in Nakanoshima area in Osaka every year together with local companies. This project involves sprinkling water on streets to create a cool sensation in summer which has been a long-standing Japanese wisdom for curbing the heat island effect. 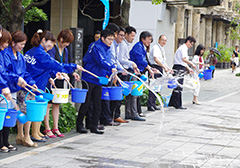 Since 2012, we have been involved in litter cleanup activities along walkways and the surrounding area from the Oebashi to the Tamaebashi which cross the Dojimagawa together with local companies in Nakanoshima area in Osaka every year*.

* Activities were cancelled in 2013 due to rain 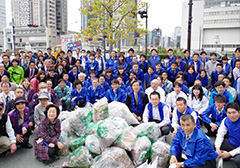 We have been cooperating in disaster response training concerning stranded persons together with companies and groups in the Akihabara Station area every year since 2010 with the purpose of providing a support system to those who find it difficult to get home after an occurrence of a major disaster. 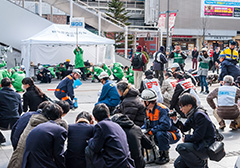 AED machines are provided in major buildings to be easily accessible by tenants and visitors. In addition, Group employees take courses on how to use the AED machines and emergency life-saving techniques. 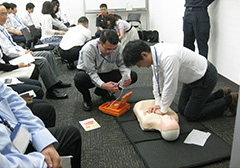 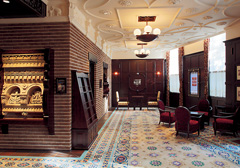 With the aim of creating a base for generating new industry and nurturing human resources, the “Akiba Techno Club (ATC)” is operated in the “Akihabara Daibiru Building,” with membership mainly composed of the tenants of the building. Through the ATC, we seek to stimulate both interuniversity collaboration and industry-academic collaboration by facilitating exchanges of information among professionals working at the forefront of IT. In addition, in order to communicate these efforts both internally and externally, information about events and research results is published on an ATC website offering information about industry-academic collaboration. 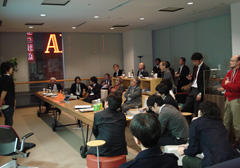 “CAMP (Children’s Art Museum & Park)” is held at the “Akihabara Daibiru Building” in order to help enhance the creativity and communicative ability of the children who are the bearers of the next generation. CAMP is a workshop focused on making things, based on the concept of allowing children to expand their circle of communication by discovering their own ways of expressing themselves while having fun, through the experience of creating pictures or handicrafts, working on group projects and presenting their creations. The workshops have been conducted regularly since 2005, including the "Crickets Workshop"under the joint sponsorship of SCSK Corporation and Daibiru.

* “Crickets” are small, battery-powered computers researched and developed by theMedia Lab of the Massachusetts Institute of Technology (MIT) in the United States.Combining the “Crickets” mini-computer with motors, lights, sensors, speakers and some 300 different materials together with their own ideas, the children make toys that are programmed to move. 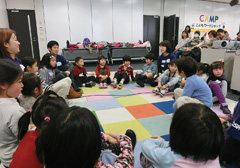 Starting in 2012, the art event “Smiles x Children x Nakanoshima” has been held at the “Nakanoshima Daibiru Building.” This event, which fosters the imaginative power of children through the process of making things, is a project that lets children experience art up close. Activities include the creation of a huge koinobori (carp streamer) assembled from drawings by the children, and a panel of about two meters in length on which artists paint pictures on the theme of “smiles.” 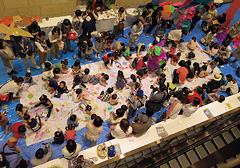 The Osaka Classic is a classical music festival which started in 2006. The main venues for the concerts include parts of office buildings and cafes so even those who are not familiar with classical music can enjoy it. Daibiru has provided spaces with an atrium as stages in our Nakanoshima Daibiru Building, the Daibiru-Honkan Building and the Shin-Daibiru Building to a number of different orchestras including the Osaka PhilHarmonic Orchestra every year since September 2009, as a way to contribute to local cultural activities. 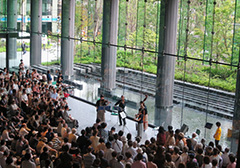 In March 2015, we made contributions to the city of Osaka by making improvements to Dojima Park on the south side of Shin-Daibiru Building together with its construction. The land for Dojima Park was originally a park with green area which we created and donated to the city of Osaka in 1959. After this park was cleared away to make room for an expressway, it was reconstructed in 1977.
However, the park became dilapidated so it went under renovations after consultation with the city of Osaka and the local community.
The latest improvements to this park include measures against illegal parking and increased lighting along with improvements of pavement and greenery to create a bright and clean park. 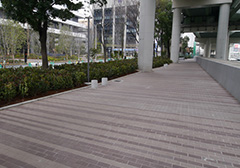 We participate in the Living Architecture Museum Festival Osaka which is the Osaka version of the event exemplified by the Open House London, involving opening buildings to the general public free of charge so people can get a first-hand architectural experience. This event involves providing guided tours and holding photo exhibitions at halls in our buildings. 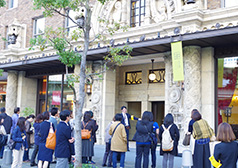 As a sponsor company, we supported the “23rd Osaka YMCA International Charity Run 2017” held in October 2017, with our employees and their families participating in the event as runners.
This event is held with the goal of supporting children with disabilities, and participation fees and contributions to the charity run are used for a support program for disabled children conducted by the YMCA. Daibiru plans to continue sponsoring this event. 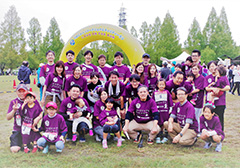 The Daibiru Group has joined the “UN Global Compact.” The UN Global Compact, declared in January 1999 by the former United Nations Secretary General Kofi Annan and established in 2000 at the UN Headquarters in New York, is an initiative that calls on companies to voluntarily support and practice in their corporate activities ten universally accepted principles in the four areas of human rights, labour, environment, and anti-corruption. Recognizing that the “Group Code of Conduct” and these ten principles share a common philosophy, we will pursue our CSR activities even more vigorously through participation in the “UN Global Compact.” 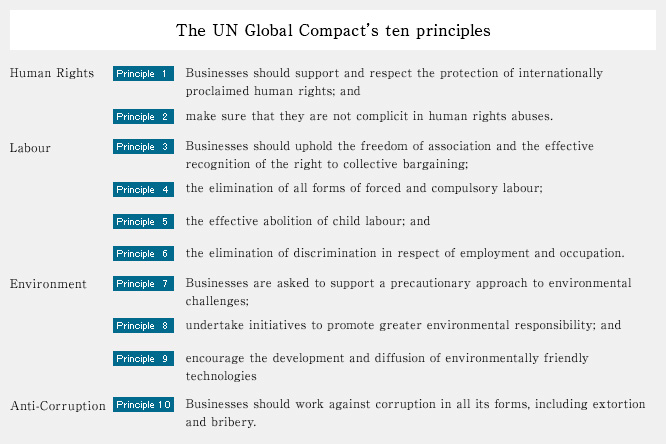 The message from President Tomoe Kudo almost half a century ago — Developing land and promoting civil engineering for the sake of human life, while maintaining the living environment of all beings, are the wisdom of human beings and the rationale for them to be the lords of creation — is the DNA of DAIBIRU.

“Nakanoshima Shiki-no-oka” is planted with a variety of trees such as plum, cherry, Japanese dogwood, and maple, along with ground-covering vegetation, to evoke a sense of the four seasons. The land is hilly, and the ground-covering vegetation spread out at the foot of the trees is designed to bring the area together as a unified green space. Most of the trees on the hill are flowering trees that bear plenty of fruit, making it a spot friendly to living creatures that attracts wild birds, butterflies, bees and other insects. In addition, mist machines installed along the slope (operating in summer only) draw the cool breeze from Osaka Bay into the block to create a cool spot and help control the heat island effect in the city. 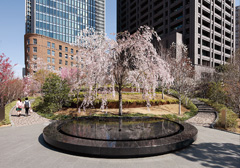 “Shin-Daibiru Building Dojima-no-mori” inherits the spirit of the former Shin-Daibiru Building rooftop tree garden and with the concept of “a forest that is good for not only people but also other living things” we have replanted some of the trees planted in the former building’s “rooftop tree garden,” including Japanese zelkovas and maples that are around 50 years old, and in addition we use primarily indigenous varieties of trees to create a green space of approximately 1,000 tsubo, the same as in the former building. Due to these initiatives, we became the first in West Japan to acquire AAA evaluation, the highest rank, in JHEP Certification which evaluates contributions to the ecosystem.

Note that an external organization carried out an organism monitoring study to specifically ascertain the contribution to the ecosystem and the results confirmed that a food chain had been established to some extent in Dojima-no-mori. For birds and insects, this kind of habitat environment is valuable in a city, so we were evaluated as having made a large contribution to the ecosystem. 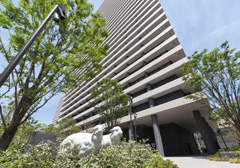 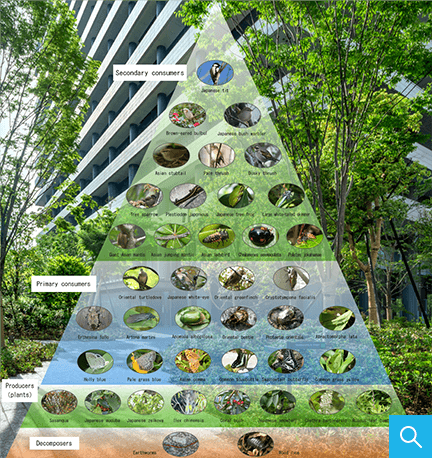 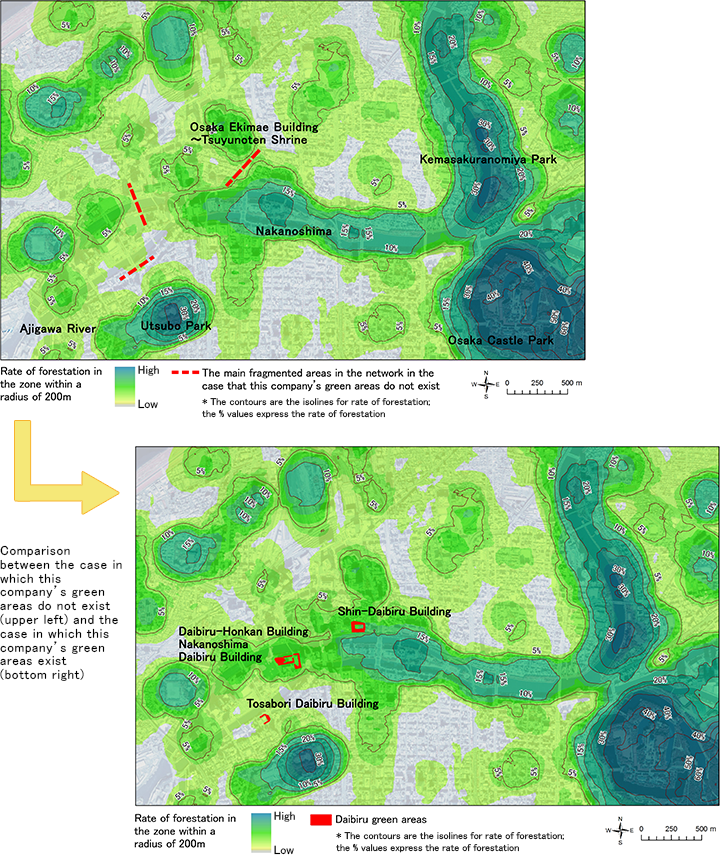 The CO2 emissions, energy use, and their intensity (per operating floor area) of our properties* over the past five fiscal years are shown in the diagram on the right. The operating floor area differs in each fiscal year and energy use has changed. But we have proceeded with initiatives to reduce the environmental impact, and as a result the intensity is on a declining trend.

[Adoption of environment-friendly facilities in new buildings]
In addition to using highly insulated facades (for exteriors such as windows and walls), the Nakanoshima Daibiru Building and the Daibiru-Honkan Building have adopted a district heating and cooling system utilizing river water.

Our submission of ‘Measures for Dealing with
Global Warming report’ based on ‘Tokyo Metropolitan
Ordinance on Environmental Preservation’ as follows:

The water use and intensity (per operating floor area) of our properties* over the past five fiscal years are shown in the diagram right. Water use in fiscal 2019 increased 10% in volume compared to fiscal 2015 due to an increase in the number of properties. However, intensity remained almost flat. The Company strives to utilize water resources effectively through efforts such as adopting the latest sanitary fixtures when renovating or constructing new buildings as well as utilizing rainwater for plant irrigation.

* Scope of the data: office and commercial buildings owned
by the Company (buildings subject to the Energy-Saving Act)

* Scope of the data: office and commercial buildings owned
by the Company (buildings subject to the Energy-Saving
act for which calculation is possible)